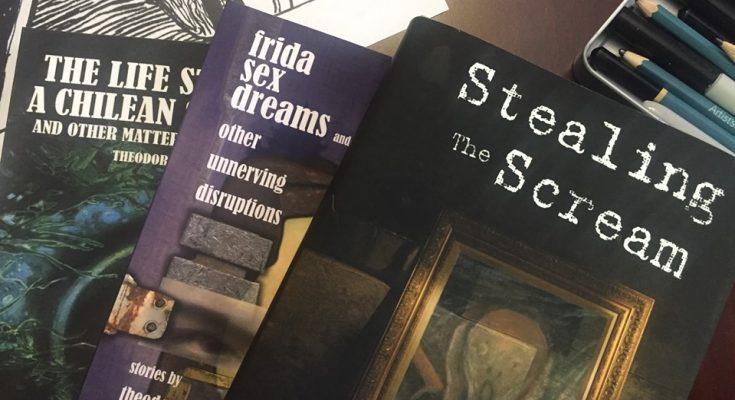 In 2004, masked thieves stole Edvard Munch’s The Scream from an Oslo museum. Norwegian police recovered the painting two years later but never explained how or where they’d found it. My 70,000-word literary-leaning, humor-laced, crime novel Stealing The Scream tells what may have happened. This collection mixes elements of SciFi, humor, erotica, and literary fiction and includes stories about an over-sexed octopus, Jimmy Carter’s alien encounters, and an attempt to reach Harry Houdini through a seánce.  All of the stories are about facing the unknown whether that unknown is Frida Kahlo, a fifty-foot woman, or a painting elephant. This humor-laced collection includes stories about professional eating, a boy perceived as a deity, sinister eyebrows, an animate voodoo doll, and a teenager with a super-human sense of smell. All these stories are about facing the unknown, whether that unknown is the pressure of fatherhood, a talking canary, or a girlfriend who has turned into a zombie.    Read a review. Mr. Ben hopes that teaching with a monkey on his shoulder will energize his classroom and make him look iconic like Frida Kahlo. Instead, his pet monkey, Zacharia, causes a food fight and a flatulence-induced evacuation. Mimi is a new student and loves learning, but that’s hard to do with an unruly monkey at school. Knowing her teacher’s love of Frida Kahlo is partly to blame for the classroom chaos, Mimi studies the famous artist and monkey owner. She develops a deep appreciation for Kahlo and sympathy for Mr. Ben. Before Mimi can figure out her next move, Animal Control raids the school causing a monkey-chasing melee. When it’s over, Zacharia is imprisoned, Mimi has a broken hip, and Mr. Ben is in trouble with the parents’ committee. Mimi must figure out how to free Zacharia and save her teacher’s job, and she thinks she’s found an answer in Frida Kahlo’s biography.

Get it in here.